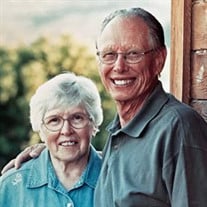 Wendell H. Hall passed away on December 24, 2019 in Provo, Utah surrounded by his wife and family. He was born April 10, 1923 in Ogden, Utah to Howard and Florence Tracy Hall. As a young boy he lived in Marriott, Utah where he enjoyed fishing and swimming in the creek bordering their farm, and never lost his love of the great outdoors. After moving to Ogden at age ten, he continued his education at Lewis Elementary/Jr. High, Ogden High, and Weber College. His studies were interrupted by World War II and combat through France, Germany, and Austria. He was appointed LDS group leader of the 103rd Infantry Division. Shortly after his return home from the war, he served for three years as a missionary for The Church of Jesus Christ of Latter-day Saints in Argentina. He continued his education at Weber State, the University of Utah, the University of Vienna (on a Fulbright Scholarship), the University of Michigan, and La Universidad Interamericana (Saltillo, Mexico). He was chairman of the foreign language department at Northland College and Weber State. From 1962-66, during the depth of the Cold War, he worked for the U.S. Information Agency in Chile. From there, he became a professor of Spanish at BYU, retiring in 1986. Though he taught courses in Linguistics, Literature, Culture, and Pedagogy, his major interest was the adaptation of modern media for foreign language learning. Wendell served as a mission president for the LDS church in Buenos Aires, Argentina from 1981-84. He was president of the LDS Missionary Training Center in Santiago, Chile from 1989-90. He credited most of his success in all his endeavors to his able, loving wife, and the support of their beloved children. He married Merrill Evelyn Watkins on August 25, 1950 in the Logan, Utah LDS Temple. He is survived by Merrill and six children: John W. Hall (Gudrun), Moorhead, MN; Marjean Brooks (Richard), Provo, UT; Wendy Petersen (Sandy), Rockwall, TX; Anna Ashcroft (Marvin), Clovis, CA; Teresa Larsen (Joe), Provo, UT; Carolyn Marriott (Jim), Wallsburg, UT; 35 wonderful grandchildren and 68 darling great-grandchildren. Their precious daughter, Alice, passed away at 3 months of age. Three brothers preceded him in death: H. Tracy Hall, Donald R. Hall, and Delbert H. Hall. He is also survived by one brother: Eugene M. Hall. In retirement, he devoted much of his time to campaigning for English spelling reform and creating literacy programs for English and Spanish. He enjoyed writing—copious correspondence, technical articles, poetry, non-fiction, fiction, and translations. Entertaining his grandchildren was always a major focus, as was basking in the sun on the deck as he enjoyed the beautiful view of Wallsburg Valley. Funeral services will be held at 11:00 a.m., Monday, December 30, 2019 at the Wallsburg 2nd Ward Chapel, 494 West Main Canyon Road, Wallsburg, Utah. Family and friends are invited to a viewing held from 9:30-10:45 a.m. prior to services Internment will take place at the Provo City Cemetery. Condolences may be expressed at www.bergmortuary.com.

Wendell H. Hall passed away on December 24, 2019 in Provo, Utah surrounded by his wife and family. He was born April 10, 1923 in Ogden, Utah to Howard and Florence Tracy Hall. As a young boy he lived in Marriott, Utah where he enjoyed fishing... View Obituary & Service Information

The family of Wendell H. Hall created this Life Tributes page to make it easy to share your memories.