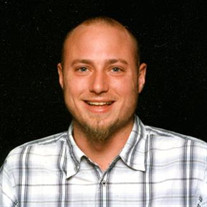 Weston was born on December 31, 1980 and tragically lost his life on October 9, 2015. He is survived by his unborn child, a baby girl to be named Grace Andraya Smith; father, Wesley Cloy Smith; mother Barbara Mortensen Smith; three sisters and three brothers (brothers-in-law), Lindsay Marie Smith Dry, Christopher John Dry, and their three children, Auston Charles Dry, Skyller Johnathan Dry and Allyssa Marie Dry; Lacy Aleece Smith Jones, Reggie Dustin Jones, and their four boys, Braidon Reggie Jones, Jesse Max Jones, Ethan Carter Jones, and Asher Leo Jones; and Andraya Jilleen Smith Williams, Jacob Levi Williams, Jaydon Levi Williams and Baby Williams on the way. Weston grew up in Edgemont and loved being on the farm with the dogs and horses which he loved riding. He loves hiking and the beauty of nature all around him. Being the only boy, he loved his sisters dearly and had them wrapped around his fingers. He was excellent at laying tile and landscaping. He took pride in his work. He was a big time video gamer, and that helped him through difficult times. Weston had a smile that lit up the world, a contagious laugh, and a heart of gold. Funeral services will be held at 11:00 a.m., Saturday, October 17, 2015 at the Berg Drawing Room Chapel, 185 East Center Street, Provo, Utah. A viewing will be held at the mortuary on Friday, October 16, from 6-8:00 p.m. and Saturday, from 10-10:45 a.m. prior to services. Condolences may be extended to the family at www.bergmortuary.com.

The family of Weston Cloy Smith created this Life Tributes page to make it easy to share your memories.