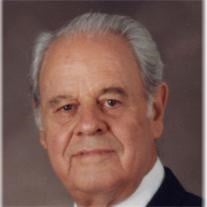 Courageously submitting to a recent crippling illness, Wilford E. Smith died at home on April 20, 2010. He was born in Holladay, Utah on May 16, 1916 to George Carlos and Lillian Emery Smith, their seventh child and second son. He grew up on the Smith Brothers Dairy Farm, forming tight bonds with his three younger brothers in their daily chores and playful frolicking. After his father died, he found work at a CCC camp in Southern Utah. He was a motivated learner and doggedly pursued his ambitions to be a teacher. He served as Chaplain in the U.S. Army, participating in the Pacific Theater in WWII and achieving the rank of Colonel. After retirement, he was elected President of the National Chaplains Reserve Association. He held memberships in many professional and service organizations acting as president in them on many occasions. He especially enjoyed being a part of Central Utah Football Officials Association and coaching his sons among other young boys in many sports. He earned a Bachelors Degree from the University of Utah, lettering in wrestling. His Masters degree was granted at B.Y.U. and his PH.D was earned at the University of Washington. He taught in several seminaries and for thirty-five years taught sociology at B.Y.U. He directed educational tours for B.Y.U. He spoke Maori, French, and Bislama. He was a member of the Church of Jesus Christ of Latter-Day Saints and served in many capacities; notably as a missionary to New Zealand under President Matthew Cowley, twice as a bishop, and as a Mission President over the Suva Fiji Mission. His testimony was unwavering. He authored two text books on sociology, wrote articles for professional publications, as well as several journals of discourses, personal histories, and poems for his posterity. He always told us he was the richest of men because of his extraordinary wife and wonderful children. He carefully tended to her care during all of her illnesses spanning 68 years. He was a mentor to extended family, students and friends. Every mealtime in his home became a mini seminar on a variety of subjects. He taught righteous precepts and was a consistent example of those tenets. He, Papa, is loved because he first loved us. He was always looking out for the underdog. He shall be dearly missed, but we gain comfort in knowing he is joyously reunited with his dear wife, Ruth, his forebears, all ten of his siblings, and his son, George, who lived but a few hours in mortality. He is survived by his children, Charlotte (Kent) Knudsen, Boise, Idaho; W. Emery, Jr. (Pamela Packer) Smith, Salt Lake City; Sherman Christensen (Bobbi Aboe) Smith, Salt Lake City; Ronald Tye ( Adriana Castalan) Smith, Cedar Hills; Jeffrey Randall (Karen Bone) Smith, Provo; twenty-eight grandchildren, fifty-nine great grandchildren, Andrew Christensen, brother-in-law,; Beth Christensen Cannon, Leah Smith, sisters-in-law, and many nieces and nephews. Contributions to the Perpetual Education Fund would be a valuable remembrance. Farewell then, to an honorable, noble, son, husband, father, friend, our Papa. Funeral Services will be held Saturday the 24th, 2010 at 12:00 p.m. at the Oak Hills 7th Ward Chapel, 1038 N. 1200 E. in Provo, UT. Friends may call at Berg Mortuary of Provo, 185 E. Center St. from 6:30-8:00 p.m. or at the Ward Chapel on from 11:00-11:45 a.m. Interment East Lawn Memorial Hills Cemetery. A live broadcast of funeral services will be available at www.thefuneralview.com. Condolences may be emailed to [email protected]

Courageously submitting to a recent crippling illness, Wilford E. Smith died at home on April 20, 2010. He was born in Holladay, Utah on May 16, 1916 to George Carlos and Lillian Emery Smith, their seventh child and second son. He grew up on... View Obituary & Service Information

The family of Wilford Smith created this Life Tributes page to make it easy to share your memories.