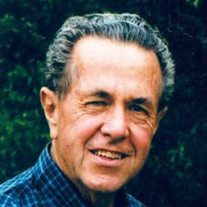 Our beloved husband and father, Wilfred Kay Williams, passed away on Wednesday, April 23, 2014, in Provo, Utah, at the age of 83, when his heart and lungs finally received a much-deserved rest. He was born October 7, 1930, to Wilfred Henry and Mary Ardell Fullmer Williams in Bountiful, Utah, the fifth of six children. He graduated from Davis High School, where he held various leadership positions and was active in basketball and tennis. He attended the University of Utah, and it was there he met his future wife, Bonnie Jeanne Plummer. They were married in the Salt Lake Temple on July 16, 1953, while Kay was on leave from the U.S. Army’s Officer Candidate School during the Korean War. They celebrated their 60th Wedding Anniversary this past July. Following graduation from the University of Utah, Kay and Bonnie moved to Fort Leonard Wood, Missouri, where Kay served as an officer. Soon after, they moved to California, where Kay received a Master of Business Administration degree from Stanford University. He was later employed by U.S. Steel, Thiokol Chemical Corporation, Stanford Research Institute, Bank of America, and had his own consulting firm in the San Francisco Bay Area. The family spent 30 years in Sunnyvale, California, before returning to Utah. Kay is a member of The Church of Jesus Christ of Latter-day Saints and deeply loves the gospel of Jesus Christ. He has served in many callings, including as bishop of the Sunnyvale Ward and stake president of the Palo Alto and Los Altos, California Stakes. He also served as an ordinance worker in the Nauvoo, Illinois and Provo, Utah Temples. He and Bonnie served three missions together: Minneapolis, Minnesota; Nauvoo, Illinois; and the Salt Lake City Family History Center Mission. They will forever cherish the friendships they made and their many priceless experiences. Dad and Mom have been dedicated and unwavering in their lifelong commitment to the gospel of Jesus Christ and to serving others. We will always remember kneeling together in family prayer, daily scripture reading (we especially loved doing it at 6:00 a.m., fully dressed), and Family Home Evening without fail every Monday night, which often included the many neighbors and acquaintances who were invited to join us. These missionary home evenings led to many eternal, priceless friendships. Along with his testimony, Dad’s greatest treasure and legacy is his family. He is survived by his wife, Bonnie, and their six children: Brian and his wife, Liro (Cypress, California); Tracy and his wife, Lynn (Vancouver, Washington); Melinda Ammons and her husband, Mark (Provo, Utah); Robin Gibby and her husband, Darin (Aurora, Colorado); Richard and his wife, Kyra (Whitehall, Montana); Matthew and his wife, Tisha (Cottonwood Heights, Utah). He is also survived by his well-loved grandchildren and great-grandchildren: Jenni Doss (Curt and son, Collin), Rebeca Fioravanti (Brian and sons, Jaden and Roman), Lisa Anderson (Hunter), Michael, Amy, and Kevin Williams; Katherine (serving a full-time mission in Viña del Mar, Chile), Kyle (serving a full-time mission in McAllen, Texas), Aaron, and Emma Williams; Christopher (deceased), Jonathan (Brianne and daughter, Sydney, and son, Harrison), Elizabeth Davis (Eric and son, Christopher), Hilary, and William Ammons; Madeline, Nathaniel, Isabel, and Talmage Gibby; Adam, Mack, and Finnean Williams; Benjamin, Isaac, Annie, and Gabriel Williams. Dad was preceded in death by his parents; stepmother, Ruth (Cushing) Williams; siblings, Doris Barrett, Dora Black, Vada Van de Vanter, Clyde Williams, and Robert Williams; as well as his grandson, Christopher Ammons. Dad has blazed the trail for us to follow. We have never questioned his monumental faith, his integrity, his incredible work ethic, or his love for us. We are forever grateful for the example he has set for his posterity; we have only to follow his lead until we are together again. “Therefore, O ye that embark in the service of God, see that ye serve him with all your heart, might, mind and strength, that ye may stand blameless before God at the last day.” (D&C 4:2) We love you, Dad. Families are FOREVER! Funeral services will be held Friday, May 2, 2014 at 11:00 a.m. at the Edgemont 8th Ward Chapel at 3050 Mojave Lane in Provo, Utah. Friends may call Thursday evening from 6:00 to 8:00 p.m. at Berg Mortuary of Provo, 185 East Center Street, and also from 9:00 to 10:30 a.m. at the church prior to services. Interment will be in the Provo City Cemetery. Condolences may be sent online at www.bergmortuary.com. In lieu of flowers, please consider donating to the LDS Missionary Fund.

Our beloved husband and father, Wilfred Kay Williams, passed away on Wednesday, April 23, 2014, in Provo, Utah, at the age of 83, when his heart and lungs finally received a much-deserved rest. He was born October 7, 1930, to Wilfred Henry and... View Obituary & Service Information

The family of Wilfred Kay Williams created this Life Tributes page to make it easy to share your memories.