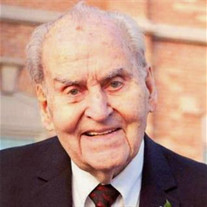 William “Bill” Parr Mehew, 98, passed away peacefully in Orem on October 10, 2019, surrounded by family members. He was born April 25, 1921 to Levi John “Jack” and Annie Parr Mehew in Raymond, Alberta, Canada where he was raised along with his brother, Leonard, and four sisters, Dorothy, Mona, LaVere, and Connie. Bill met the love of his life, Melba King, during high school in Raymond, but World War II interfered and at the young age of eighteen Bill went off to war in August 1939 joining the 408th Squadron in the Royal Canadian Air Force—earning his wings within one year. As a Flight Lieutenant, he was stationed in England for five years and piloted his favorite aircraft known as the “Piccadilly Princess” Lancaster aircraft. He flew many night-time bombing missions over France and Germany during the war. Bill’s life was spared during a horrific incident when faced with a crash landing of his aircraft, leaving him stunned, yet in control, thereafter, noting his new name as “Wild Bill”…not so much as being a risk-taker, but rather, taking his crew to safety and protecting them from harm’s way. The war was finally over and he arrived home in August 1945, one month later married Melba in the Cardston Alberta Temple on September 11, 1945. They shared fifty wonderful and precious years together and were blessed with six children, Randall, Elizabeth Ann, Bruce, Vonda, Nancy, and Glenn. Bill was a local firefighter volunteer in Raymond for 12 years while building a home and working to provide for his family at the Mehew Blacksmith Shop with his father. He was willing to help those in need, building iron fences—anything iron for that matter—shoeing horses, repairing horse drawn machinery, repairs for auto machinery, and tending to pertinent needs of the community. One bitter cold January day in 1956 a devastating accident occurred with a fuel tanker truck that caused an explosion at the Mehew Sugar City Motors Garage that completely destroyed the building. Bill was left severely burned from head to toe and hospitalized for a time, with months of recovery at home. Rather than rebuilding the business, Bill opted to move his young family to Provo, Utah and enroll at Brigham Young University, majoring in Industrial Arts Education. In 1963, he received his Bachelor’s Degree and became a metal shop teacher at Dixon Junior High School in Provo. He later earned a Master’s Degree in Industrial Arts and afterwards built the metal shop in the new Timpview High School in Provo. He spent many extra hours after school guiding and helping many young men finish their projects. He taught in the Provo School District for a total of 25 years. Bill was a lifetime active member of The Church of Jesus Christ of Latter-day Saints and served in many leadership positions. He was a member of the bishopric of the Grandview 24th Ward and later called as bishop of the BYU 241st Young Single Adult Ward, served on a Stake High Council, and was a scout troop committeeman for many years. In 1986, Bill and Melba were called to serve as temple missionaries in the Washington D.C. Temple; they loved serving in the temple. Afterwards Bill served 16 years as an ordinance worker in the Provo Temple. He loved life, laughter, and most importantly, his posterity. Bill and Melba have 6 children, 37 grandchildren, 99 great-grandchildren, and 3 great-great-grandchildren, making a total of 145 in their posterity. He always taught his children and grandchildren to live a good life, follow the Savior, find yourself in holy places, serve your fellowmen, and love one another. He is survived by his five children, Randall King (Karolee) Mehew of Provo, Utah, Elizabeth Ann Hall-Stites (Allen) of Roy, Utah, Bruce King (Kathy) Mehew of Richfield, Utah, Vonnie Mehew Gren of Provo, Utah, and Glenn King (Mary) Mehew of Provo, Utah. He was preceded in death by his parents and siblings, his beloved wife, Melba, his daughter, Nancy Mehew Tanner; son-in-law, Gordon Langley Hall, grandson, Spencer Keuter Mehew, and four great-grand-children, Darius Taylor Hagemeyer, Hyrum Gordon Barker, William Max Barker, and Justin Tanner Dixon. The family appreciates those who assisted in dad’s care during his final days, Aspen Ridge Assisted Living, Summerfield Assisted Living, and Aspen Ridge Hospice Health Care. Funeral services will be held at 11:00 a.m., Saturday, October 19, 2019 at the Grandview 17th Ward Chapel, 1122 Grand Avenue, Provo, Utah. Friends may visit with the family at the Berg Mortuary of Provo, 185 East Center, Friday, October 18 from 6-8:00 p.m., and at the church Saturday from 9:30-10:45 a.m. prior to services. Interment, Provo City Cemetery. Condolences may be shared with the family at www.bergmortuary.com.

The family of William "Bill" Parr Mehew created this Life Tributes page to make it easy to share your memories.

Send flowers to the Mehew family.