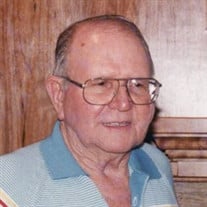 William “Bill” H. Cluff, age 86, passed away September 27, 2014 at his home surrounded by his loving family. We’re happy to know he is having an awesome reunion with his wife, family and friends and that he is now peaceful and out of pain. He was born September 5, 1928 in Keetley, Utah, to Clarence Baum and Ada Horton Cluff. He was raised in Heber and the Provo area and graduated from Lincoln High School. He married Marlyn Singleton in Sparks, Nevada on June 18, 1955. He was a Member of The Church of Jesus Christ of Latter-day Saints. He was a loving and caring person. His family meant so much to him. He worked for the Union Pacific Railroad for 4 years and retired from U.S. Steel in 1986, after 35 years. Bill joined the Army but soon after was released with a Honorable Medical Discharge. He loved the outdoors and was an avid fisherman. In his younger days he and his friends enjoyed water skiing; many times with ice still in the harbor. Bill is survived by his son, Steven M. Cluff; daughter, Sherrie L. Craghead and grandson, Colton L. Craghead, all from Provo; brother, Kenneth (Helen) Cluff and sister, Linda (Randy) Edwards. He was preceded in death by his wife, Marlyn; parents; brother, Tom and son-in-law, Richard Craghead. I would like to thank the wonderful people at Envision Hospice for taking such good care of my father, as well as family members. Special Thanks To You All!! Graveside services will be held at 11:00 a.m. Thursday, October 2, 2014 at the Provo City Cemetery, 610 South State Street, Provo, Utah. Please meet at the grave. Condolences may be sent online at www.bergmortuary.com.

The family of William Horton Cluff created this Life Tributes page to make it easy to share your memories.

Send flowers to the Cluff family.