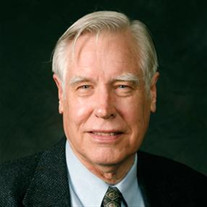 William (Bill) Edwin Dibble, 87, passed away Monday, October 29, 2018, in Provo, Utah, of cardiac arrest. He fought a long and difficult battle with kidney disease that eventually wore his physical body down. Bill was born in Schenectady, New York, on December 25, 1930, to Edwin Smith and Ruth Emily Gollaher Dibble. His father was an engineer with the General Electric Company. The family moved to a Los Angeles suburb in the mid-1930s and he received all his education in California. As part of his high school experience, Bill was a finalist in the Westinghouse National Science Talent Search which took him to Washington, D.C., to attend a formal banquet honoring the finalists. He also received the Junior Statesman Award in high school With an early interest in scientific things, Bill earned his undergraduate degree and a Ph.D. in physics from the California Institute of Technology in Pasadena, California. He interrupted his undergraduate studies to serve as a missionary for The Church of Jesus Christ of Latter-day Saints in the British Mission from 1950 to 1952. Following graduation from Cal Tech Bill was employed at the NASA Jet Propulsion Laboratory. In 1960 he joined the Physics Department faculty at Brigham Young University from where he retired when he was well into his seventies. Bill was a valued faculty member who was co-founder of an Honors Colloquium in the Sciences, a nine credit hour honors course that spanned two full semesters. The BYU Magazine in an article in the Winter 2004 issue had this to say about the class: “Dibble’s physical demonstrations are the stuff of folklore. On any given day, you’ll find him at the front of the class, an amused grin painted on his face, firing off bolts of static electricity; or launching metal rings from an electromagnet, across the quad, to a student wearing a catcher’s mitt; or choreographing amazing chemical reactions with all of the enthusiasm of a child using his first chemistry set. He is as much a performer as he is a teacher. Given that the class is designed primarily for students whose academic fields lie outside the sciences, this talent becomes an invaluable asset.” Bill married Marilyn Thompson on January 16, 2018, after years of friendship and dating. He is survived by her and by a sister, Jane (Roy) Valantine. There are also two nieces and two nephews surviving: Diane (Aaron) Rappaport, Kathy (Robert) Stepp, William R. (Connie) Valantine, and John E. (Lauren) Valantine. He was preceded in death by his father and mother, Edwin and Ruth Dibble. Funeral services will be held Monday, November 5, 2018, in the Grandview 9th Ward Chapel, 1555 North 1350 West, Provo, Utah, at 11 a.m. There will be a viewing at the same location from 9:30 to 10:45 a.m. Interment will be at East Lawn Cemetery, Provo, Utah. Condolences may be expressed at www.bergmortuary.com.

The family of William Edwin Dibble created this Life Tributes page to make it easy to share your memories.

Send flowers to the Dibble family.