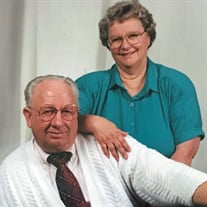 On Saturday, December 1, 2018, at the age of 89, William Madsen Halladay (Bill) was called home to our loving Savior; there to join his beloved wife, Marva and his eldest son, Billy. Bill was born Oct. 17, 1929 in Provo, Utah, to William Sr. and Fontella Halladay. He spent much of his youth in the Kamas area, where he loved to ride his horse on the beautiful hills. Like many, he lied about his age when he was 17 so he could join the Navy. He served four years and was trained in sophisticated radar and tracking. Upon his return, he received his degree in Engineering from BYU. This led to a lifelong career at the Lawrence Livermore Laboratory, from where he retired. Bill married Hettie Ann Carter, who passed away at the young age of 24, leaving behind a young son, William Austin, now deceased. In 1955, Bill married Hanne Raunholt, with whom he raised 4 children. In 1997, Bill married Marva Betteridge, who passed away in 2017. Bill was known for his love of family, his sense of humor, and his enduring service in the Lord’s church, where he served as a Bishop for many years, as well as on the Stake High Counsel. He loved the outdoors from his youth and enjoyed many summers at Strawberry Lake, where the family kept a recreational rental business. Later, he would often take his family camping at Lake Tahoe. Many of his children’s most precious memories are of backpacking and fishing in the Sierra, Nevada Mountains with their father. Bill is survived by his four children: Jette, Tad, Bryan, and Chris; their spouses; and by his sister, Ardis. He will also be warmly remembered by a host of beloved cousins, nieces, nephews, 18 grandchildren, and 22 great-grandchildren and counting. Funeral services will be held at 2:00 p.m., Saturday, December 8, 2018 at the Berg Drawing Room Chapel, 185 East Center Street, Provo, Utah. Friends may call from 1-1:50 p.m. prior to services. Interment, Provo City Cemetery. Condolences may be expressed at www.bergmortuary.com. Those wishing to make donations in Bill Halladay’s name may make them to Operation Underground Railroad at YourRescue.org. https://www.yourrescue.org/pledge/1841.

On Saturday, December 1, 2018, at the age of 89, William Madsen Halladay (Bill) was called home to our loving Savior; there to join his beloved wife, Marva and his eldest son, Billy. Bill was born Oct. 17, 1929 in Provo, Utah, to William Sr.... View Obituary & Service Information

The family of William Madsen Halladay created this Life Tributes page to make it easy to share your memories.

Send flowers to the Halladay family.