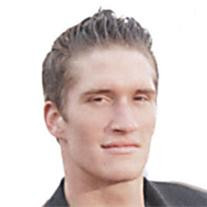 William Elliott Lewis passed away September 18, 2010 after a long battle with addiction at the age of 27. He was born August 9, 1983, to Sterling Robert and Suzanne Tooke Lewis in Provo, Utah. Will was a very charming, charismatic, young man, who touched the lives of everyone he came in contact with. He had a unique sense of humor, he could make you laugh hard or embarrass you just as quickly, only to make you laugh hard again. He gave the most loving and sincere hugs to everyone. His whole goal in life was to share the love and laughter he held so abundantly in his heart. Will loved people. He worked in the fitness industry and was a motivating influence in helping others to achieve their own personal goals. He loved hunting, fishing, working out and showing off his six-pack abs, whether you wanted to see them or not. Will attended Orem High School and received his GED from Nebo School District. He also attended Glendale Community College in Glendale, Arizona, and went on to be a successful salesman in the lawn care industry. He is survived by his father, Sterling (Nikki); siblings Jonathan Lewis (Lyndsi Hill), and Jessica (Donovan) Mortensen; step-sister, Samantha Brown; his grandmother, Joan Lewis, as well as many aunts, uncles and cousins. He was preceded in death by his mother, and his grandparents, Shirley and Bill Tooke and S. Rex Lewis. Funeral services will be held at 11:00 a.m. Friday, September 24, 2010 at the Orem Sunset Heights 8th Ward Chapel, 500 South 600 West, Orem. Friends may call at the Berg Mortuary of Provo, 185 East Center Street, Thursday evening from 6 until 8, and at the church Friday from 9:45 until 10:45 a.m. Interment will be in the Orem City Cemetery. Condolences may be sent to the family at www.bergmortuary.com.

William Elliott Lewis passed away September 18, 2010 after a long battle with addiction at the age of 27. He was born August 9, 1983, to Sterling Robert and Suzanne Tooke Lewis in Provo, Utah. Will was a very charming, charismatic, young man,... View Obituary & Service Information

The family of William Lewis created this Life Tributes page to make it easy to share your memories.

Send flowers to the Lewis family.