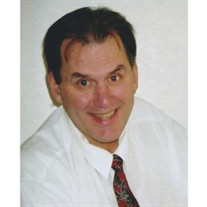 William Joseph Sansom graduated from this world to his heavenly home on September 12, 2020 in Orem, Utah after many years of health problems. Bill was born August 11, 1954 in Wabasha, Minnesota to Lottie Wilcox and Floyd Sansom. Bill is survived by his five children: Joseph, Benjamin, Sarah, Naomi, and Jacob; 15 grandchildren (Josie, Autumn, Naoma, Lael, Mordecai, Lily, Sadie, Dominique, Corbin, Blake, Jade, Jacob, Michaela, Hannah, and Eve); brother, Steve; sister, Wendy; his former wife, Suzanne Reichwaldt; an uncle, cousins, and nieces and nephews. Bill was a Funeral Director by trade and owned two funeral homes in Hilbert and Stockbridge, Wisconsin from June 1986 until his retirement from funeral service in August 1999. He also worked as an EMT, helped other funeral directors and owned a medical transfer van during this time. He graduated from Elgin-Millville High School in 1972 and entered the Navy shortly afterward, where he served for 2 years before an honorable discharge in 1974. He attended Mt. Hood Community College in Oregon from 1977-1978, where he received an Associate’s Degree in Mortuary Science. He married Suzanne Marie Theel, on March 8, 1975. She was the blonde-haired girl on the bus that Bill had admired since elementary school. They were married for 24 years. In 1984, their family drove from Wisconsin to Maryland so that they could be sealed in the Washington D.C. Temple. Bill was a member of The Church of Jesus Christ of Latter-day Saints and loved the Gospel. Bill loved his family and was so proud of his children’s accomplishments, big and small. He loved gift-giving. He was thoughtful and patient. As a funeral director, his motto was, “Serving with Kindness and Compassion.” He always had advice and was always there to listen. He always wanted the Sansom name to stand for something good. Bill believed in the resurrection through the Atonement of Jesus Christ and we know that he is having a joyful reunion with those of his family that have passed before: his parents, grandparents, and grandchildren. We look forward to the happy day when we will see him, all tears will be dried, and we will never be parted again. Graveside services will be held at 10:30 a.m., Monday, September 21, 2020 at the Utah Veterans Cemetery & Memorial Park, 17111 South Camp Williams Road, Bluffdale, Utah. Condolences may be expressed at www.bergmortuary.com.

William Joseph Sansom graduated from this world to his heavenly home on September 12, 2020 in Orem, Utah after many years of health problems. Bill was born August 11, 1954 in Wabasha, Minnesota to Lottie Wilcox and Floyd Sansom. Bill is survived... View Obituary & Service Information

The family of William Joseph Sansom created this Life Tributes page to make it easy to share your memories.

William Joseph Sansom graduated from this world to his heavenly...

Send flowers to the Sansom family.