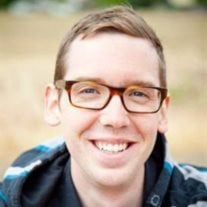 William Andrew Ungerman was born on May 18, 1989 to Mark D and Rosanna Weeks Ungerman. He attended Edgemont Elementary, Centennial Middle School, Timpview High School, and Provo Adult High School. He recently completed his associate’s degree at UVU and had just taken his EMT test. He took up cycling and rode for pleasure and transport year-round. He loved the outdoors, rock climbing, camping, throwing pots, and being with friends who describe him as: “A boy truly without guile, with a tender and unassuming heart", "He knew a lot about everything and was eager to hear about a new project or idea", "He was rare and kind and so very loved", "He was unconditionally helpful and loved serving those around him", “His positivity and enthusiasm inspired others” and "He was a gentle, kind spirit." He was a collaborator and a leader, and enjoyed bringing people together for a Sunday ride, "Study Champs," farmers market bike valeting, or helping a friend in need. "Always radiating acceptance," that was Andrew. "I remember Andrew”, his ceramics teacher recalls, "a light, not just on his face, but a flame within his grace, slim and somewhat slender, toned to use the wheels of bicycles on journeys of travel, now working to a thinness on the verge of collapse upon a spinning kick wheel, hands gently caressing the wet and slithery clay." He was interested in philosophy, science, anatomy, and medicine, just to mention a few. He loved to learn, and he learned by reading, by doing, and by sharing and listening to others. Andrew was a great listener and could always find humor in surprising times and ways. He was determined and dedicated, loyal and empathetic. He enjoyed travel, and took pleasure in finding the beauty in the smallest details. He visited China at a young age, and enjoyed road trips with his friends to Yellowstone, Yosemite, and Southern Utah. He loved Hawaii and Washington DC. He drove 30 hours straight with his brother from Utah to Alabama, stopping only for the best burger joints they could find. He talked about re-locating and was looking forward to new adventures. On March 13, he hiked to the top of the mountain, just above his home. Passed on, and relocated, for now... He is survived by his parents; brother, Alex; and two sisters, Anna Rose and Lillian Alizabeth. Andrew was the most gentle champion of kindness this world has ever seen. He was a master potter--able to throw porcelain urns the thickness of paper. He also used the skill of his hands to craft an acoustic guitar from scratch--upon which he plucked the sweetest melodies late into the night. He had the stamina of ten men and recently completed a 100 mile bicycle marathon on a fixed-gear. After developing legs of iron, he took up rock climbing to balance out his arms. We remember him as President of the Provo Bicycle collective and a passionate advocate for cyclists everywhere. Andrew was a lover of beauty, a talented craftsman, adventurer, philosopher, brother, son, and all-around exceptional human being. He was a student, teacher, son, brother, and friend…"we will look forward to seeing him on the other side of the kiln door of life. The patterns of joy that we shared as we rubbed shoulders with him are still echoing in the gracious person that he is." Funeral services will be held at 11:00 a.m., Friday, March 21, 2014 at the Provo Utah Edgemont Stake Center, 303 West 3700 North, Provo, Utah. Friends may call at the Berg Mortuary of Orem, 500 North State Street, Thursday, March 20, from 6-8:00 p.m. and at the church Friday from 9:30-10:45 a.m. prior to services. Interment will be in the Orem City Cemetery. Condolences may be sent online at www.bergmortuary.com. In lieu of flowers, please consider making a donation to the Provo Bicycle collective, throwing a pot, playing a song, taking a climb, or riding your bike to work.

The family of William Andrew Ungerman created this Life Tributes page to make it easy to share your memories.

Send flowers to the Ungerman family.