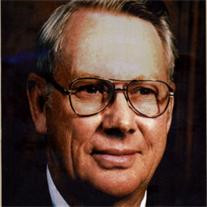 Dr. Wilmer W. Tanner passed away October 28, 2011 surrounded by his family. Almost two years ago, our father was honored on his 100th birthday by family, friends, and colleagues for his ethical hard work and contribution to all of our lives as well as the many lives he has touched over the course of his long and productive career. In 1934 our Dad chose wisely and married Helen Brown in the Salt Lake Temple. Our Father was preceded in death by his wife, Helen Tanner, of 60 years. He then married Otella Tyndal Devey Tanner who passed away in 1999. He was also preceded by his parents, 2 brothers, Ray and Vasco, and 2 sisters, Lura and Jean. He is survived by 2 sons and 1 daughter, Dr. Lynn Tanner (Margaret), David W. Tanner (Linda), and Mary Ann Barnett (Dennis); 10 grandchildren and 24 great-grandchildren. Wilmer was born on December 17, 1909, in Sanpete County, Utah to John Myron and Lois Ann Stevens Tanner. In November 1929 Wilmer served a mission for The Church of Jesus Christ of Latter-day Saints in the Netherlands. He received a BS and MA degree from Brigham Young University in Zoology. He taught at Provo High School then obtained his Ph.D. from the University of Kansas in Herpetology. He then returned to BYU as a faculty member in 1949. Professor Tanner was focused on his research throughout his life with many scientific publications. His graduate students were treated as family members. Work, family, church, community and partnership with his wife Helen were all deeply embraced and cared for by this world-renowned naturalist and teacher. The noble and principled example he has maintained over the last 101 years has generated great intellectual and social benefits to society. His singular contribution to his family, church, profession and community have been impressive. From 1960 to 1967, he edited Herpetological and succeeded in saving its host organization, the Herpetologists' League from financial collapse. Wilmer was heavily involved in the American Association for the Advancement of Science, appointed in 1961 (and reappointed in 1966) as secretary-treasurer of the Utah Academy and elected president of the same in 1969 (serving through 1971). Professor Wilmer Tanner was appointed as the curator of the BYU Life Science Museum in 1972 and quickly began working towards a building for the University's collection. He worked closely with Monte L. Bean and convinced him to fund the construction of a Life Science Museum building. Monte Bean also decided to donate his extensive trophy collection to the University to augment its life science collection. Wilmer oversaw the construction of the Monte L. Bean Life Science Museum and was quite pleased with the results. Wilmer also worked diligently to create an endowment for the museum. The Bean Museum opened its doors in 1978. At the time of his death, Dad was looking forward to the upcoming ground breaking on the expansion of the Museum and was actively engaged in writing and publishing family and museum history. Our father's love and respect for his students and academic colleagues is seen every day at the Bean Museum. A person's legacy is seldom as varied and tangible as our father's. Wilmer has set a high bar for all of us. We express here our love for his life so well exampled and lived. The last several years of his life were lived at the Courtyard at Jamestown. We wish to express our thanks to all who provided loving care and service. We love and will miss you, Dad. Your family Funeral services will be held at 11:00 a.m., Thursday, November 3, 2011 at the Provo Utah East Stake Center, 667 North 600 East, Provo. Friends may call at the Berg Mortuary of Provo, 185 East Center Street, Wednesday evening from 6 until 8 and at the church Thursday one hour prior to services. Interment will be in the Provo City Cemetery. Condolences may be sent through www.bergmortuary.com. In lieu of flowers, please send donations to the Monte L. Bean Museum, Brigham Young University, Provo, Utah.

Dr. Wilmer W. Tanner passed away October 28, 2011 surrounded by his family. Almost two years ago, our father was honored on his 100th birthday by family, friends, and colleagues for his ethical hard work and contribution to all of our lives... View Obituary & Service Information

The family of Wilmer Tanner created this Life Tributes page to make it easy to share your memories.

Send flowers to the Tanner family.