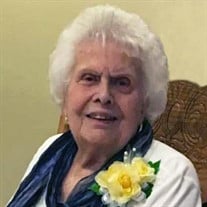 Winifred Hansen Durrant was born March 11, 1921 in Brigham City, Utah to Ernest Elijah and Beatrice Emma Bradbury Hansen. On August 2, 2019, she passed away from causes incident to age at her home in Taylorsville, Utah at the age of 98. Winifred graduated from Box Elder High School in Brigham City where she loved playing clarinet in the band. She attended Salt Lake Business College. She loved the Restored Gospel of Jesus Christ and served her first mission in Toronto, Canada. Her first area was St. Catharines, Ontario, where she met her future husband, Sterling John Durrant, a missionary serving from Provo, Utah. They were married in the Salt Lake LDS Temple February 23, 1944 for time and all eternity. They made their home in west Provo, Utah, where Sterling became a dairy farmer, and there they were blessed with six children: Catherine (Tom) Tenney, Alice Durrant, Sterling Ernest (Laura) Durrant, Patricia Emma (Ben) Weeter, Neil Edward (Jolene) Durrant and John Henry (Vickie) Durrant. A long-time family friend, Kristine Arnold, became "Number Seven." Theirs was a missionary family and each of their children served an LDS mission. Winifred served faithfully in many callings in the Church. She was a student of the scriptures, a teacher, and a president in auxiliary organizations. Her favorite calling, as she recalled in later life, was Sunday School chorister. She was an avid reader (especially Church books), and loved sewing and ceramics. She made each graduating grandchild a mother of pearl nativity set. On July 15,1975, Winifred's husband passed away which was a test of her courage. Patricia and Neil were serving missions at the time and remained there to finish their service. Winifred returned to school at the Utah Technical College in Provo, updated her business skills and went to work for Contractors Heating and Cooling for seven years. Then she served her third mission — this time to Fresno, California. Winifred dedicated her life to serving others and championed the less fortunate, caring for them as fiercely as she cared for her own family. She loved humanitarian work and spear-headed many projects in Provo's Lakeside Second Ward. Thousands of fitted diapers, hundreds of hygiene and newborn kits, countless quilts of all sizes, dresses for orphans, and school bags were the result. Whatever needed doing, she found a way to do it. In 2013, she and Alice moved to Taylorsville for their final chapter. Most sincere thanks to each of the caretakers who served in her home. Winifred's parents, her two sisters, Charlene and Barbara, and her brother, Brad, all preceded her in death as did one daughter-in-law, Janelle Durrant. She is survived by her 6 children, 30 grandchildren, 75 great-grandchildren and 2 great-great-grandchildren who always heard, "Don't do anything I wouldn't do," after every visit. She was proud to be a Republican! Funeral services will be held at 11:00 a.m., Wednesday, August 7, 2019 at the Lakeside 2nd Ward Chapel, 2530 West 200 South, Provo, Utah. Friends may visit with the family at the Berg Mortuary of Provo, 185 East Center Street, Tuesday, August 6 from 6-8:00 p.m. and at the church Wednesday from 9:30-10:45 a.m. prior to services. Interment will be in the Provo City Cemetery. Condolences may be expressed at www.bergmortuary.com.

Winifred Hansen Durrant was born March 11, 1921 in Brigham City, Utah to Ernest Elijah and Beatrice Emma Bradbury Hansen. On August 2, 2019, she passed away from causes incident to age at her home in Taylorsville, Utah at the age of 98. Winifred... View Obituary & Service Information

The family of Winifred Hansen Durrant created this Life Tributes page to make it easy to share your memories.

Send flowers to the Durrant family.