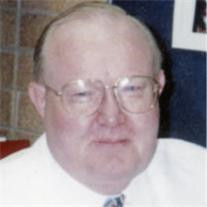 Woodrow Kirk Ludlow, beloved husband, father and grandfather, went home to his Heavenly Father on December 12, 2011 from complications of kidney failure. He was born on June 10, 1941 in Santa Maria, California to Jesse Woodrow and Alta Frances Ludlow. His father was stationed there with the Army. Kirk was one year old when his father was sent to fight in the Pacific. Kirk's father never had leave to come home, so Kirk didn't see his father again until he was five years old. The Ludlow's then moved to Spanish Fork, Utah and Kirk graduated from Spanish Fork Senior High School. Kirk served a mission for The Church of Jesus Christ of Latter-day Saints from 1961 to 1963 in the Northwestern States Mission. He spent most of his time as a traveling Elder in the Boise, Idaho area. He graduated from Brigham Young University in 1966 with a degree in accounting. He continued working at BYU as an Administrator in Dining Services for 35 years. Kirk married his best friend and eternal companion, LaDawn Rasmussen, on July 16, 1964 in the Manti LDS Temple. They later adopted two daughters. Kirk served many years in church leadership; first as a Counselor in Bishopric, as a Bishop in a new ward, Counselor in the Stake Presidency for ten years and also as a Gospel Doctrine Instructor. He loved The Church and always had a special place in his heart for the youth. Kirk retired from BYU in 2001, when he was diagnosed with congestive heart failure. In the ICU, Kirk and LaDawn made a "bucket list" of 27 places to visit (this was long before the movie came out) and accomplished all but three before his health failed again. One of their fantastic adventures included driving their red Mustang Convertible from Grants Park in Chicago along Route 66 to the end of the highway on the Santa Monica Pier. Kirk and LaDawn's house was always filled with love and laughter. It was a gathering place where everyone always felt welcome. He was well known for his "Ludlow" burgers at church and family functions. Kirk had so many good qualities and so many people admired, loved and respected him. He always had a good outlook and a happy attitude. Kirk never complained while enduring the challenges of his health complications. Even during the last two weeks of his life while under hospice care, Kirk was still able to crack jokes. He never felt sorry for himself. Kirk is survived by his wife, LaDawn; two daughters, Heathre (Blaine) Hone and HiDee (Cody) Dabb; brothers, Duane (Cindy) Ludlow, Mike Ludlow and Doug (Cheryl) Ludlow; one sister, Lana (John) Williams; four granddaughters and many nieces and nephews who all love him very much. He will truly be missed. If everyone were as kind, generous, happy, forgiving, non-judgmental and genuine as Woodrow Kirk Ludlow, the world would be good. Funeral services will be held on Friday, December 16, 2011 at 10:00 a.m. in the Stonewood 4th Ward Chapel, 450 South 100 West, Orem, Utah. Friends may call at Berg Mortuary, 185 East Center Street, Provo, Utah on Thursday evening from 6 until 8 and at the church on Friday morning from 9 until 9:45. Interment will be in the Fairview City Cemetery. Condolences may be sent to the family through www.bergmortuary.com.

Woodrow Kirk Ludlow, beloved husband, father and grandfather, went home to his Heavenly Father on December 12, 2011 from complications of kidney failure. He was born on June 10, 1941 in Santa Maria, California to Jesse Woodrow and Alta Frances... View Obituary & Service Information

The family of Woodrow Ludlow created this Life Tributes page to make it easy to share your memories.

Send flowers to the Ludlow family.