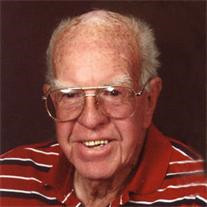 Wren Arvil Scott, 83, died April 15, 2012 in Provo, Utah. He was born on April 17, 1928 in Charleston, Utah, the only son of Arvil H. and Mary Ethel Widdison Scott. He married Colleen Sorenson June 17, 1953 in Provo, Utah. They were later sealed in the Provo Temple December 18, 1972. At a young age he loved riding horses, hunting, and fishing in the Wasatch mountains. He received his education in Provo City Schools. He owned W. A. Scott Mill and Lumber where he was a skilled craftsman, building beautiful cabinets. He enjoyed gardening, always hoeing to the end of the row. He loved going to Mazatlan Mexico in the winter, and Fish Lake Utah in the summer. He also loved watching the Utah Jazz and "Come On Down" the Price is Right. He was preceded in death by his parents and 4 sisters. Survivors include his wife Colleen; a daughter Cindy (Micheal) Roddam; three sons: Tim (Kelly), Brad (Sharee) and Brent (Michelle); 14 grandchildren, and 15 great-grandchildren. Funeral services will be held at 11:00 a.m., Thursday, April 19, 2012 at the Lakeview 1st Ward Chapel, 1700 North Geneva Road, Provo, Utah 84601. Friends may call at the church from 9:30 – 10:30 a.m. prior to services. Interment, Charleston Cemetery. Condolences to the family may be sent through his obituary at www.bergmortuary.com.

The family of Wren Scott created this Life Tributes page to make it easy to share your memories.