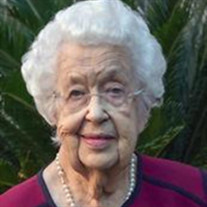 Our beloved mother, Yvonne Farr Morgan, passed away March 5, 2020 just two weeks short of her 94th birthday. Yvonne was born on March 21, 1926 in Tucson, Arizona to Rosemilda Ranghilda (Hilda) Bluth and Heber Erastus Farr. She was the youngest of 12 children; the family moved to Utah shortly after her birth. She grew up in Provo, Utah where she met her future husband, Ted Morgan, in junior high school. They were married in the Salt Lake Temple on December 17, 1947 and moved to Casper, Wyoming where their three sons were born. They lived in Independence, Missouri for 10 years, returning to Provo in 1973. She and Ted served a mission for The Church of Jesus Christ of Latter-day Saints to Oakland, CA in 1992. She was an excellent cook, seamstress, gardener and avid BYU fan, rarely missing a basketball or football game. A wonderful wife and mother, a dear friend to many, her greatest love was being with family who came often to fill up her home and her life. For the past two years she has been living near her son Ted and his family in Mesa, Arizona. Yvonne is survived by her three sons, Ted (Shanna) Morgan of Gilbert, AZ, Stuart (Kathryn) Morgan of West Chester, OH and Paul (Loring) Morgan of Yukon, OK; 9 grandchildren and 21 great-grandchildren. She was preceded in death by her husband, Theodore Eugene Morgan, her parents, and 11 brothers and sisters. Funeral services will be held on Saturday, March 14, at 11:00 a.m. in the Provo Utah Grandview South Stake Center located at 1122 Grand Avenue, Provo, Utah. Friends may visit with the family on Friday evening, March 13, from 6:00-8:00 p.m. at the Berg Mortuary located at 185 E Center St, in Provo and prior to the funeral on Saturday morning from 9:30-10:30 a.m. at the Grandview South Stake Center. A graveside prayer and interment will follow at the Provo Cemetery. Condolences may be expressed at www.bergmortuary.com.

The family of Yvonne Farr Morgan created this Life Tributes page to make it easy to share your memories.